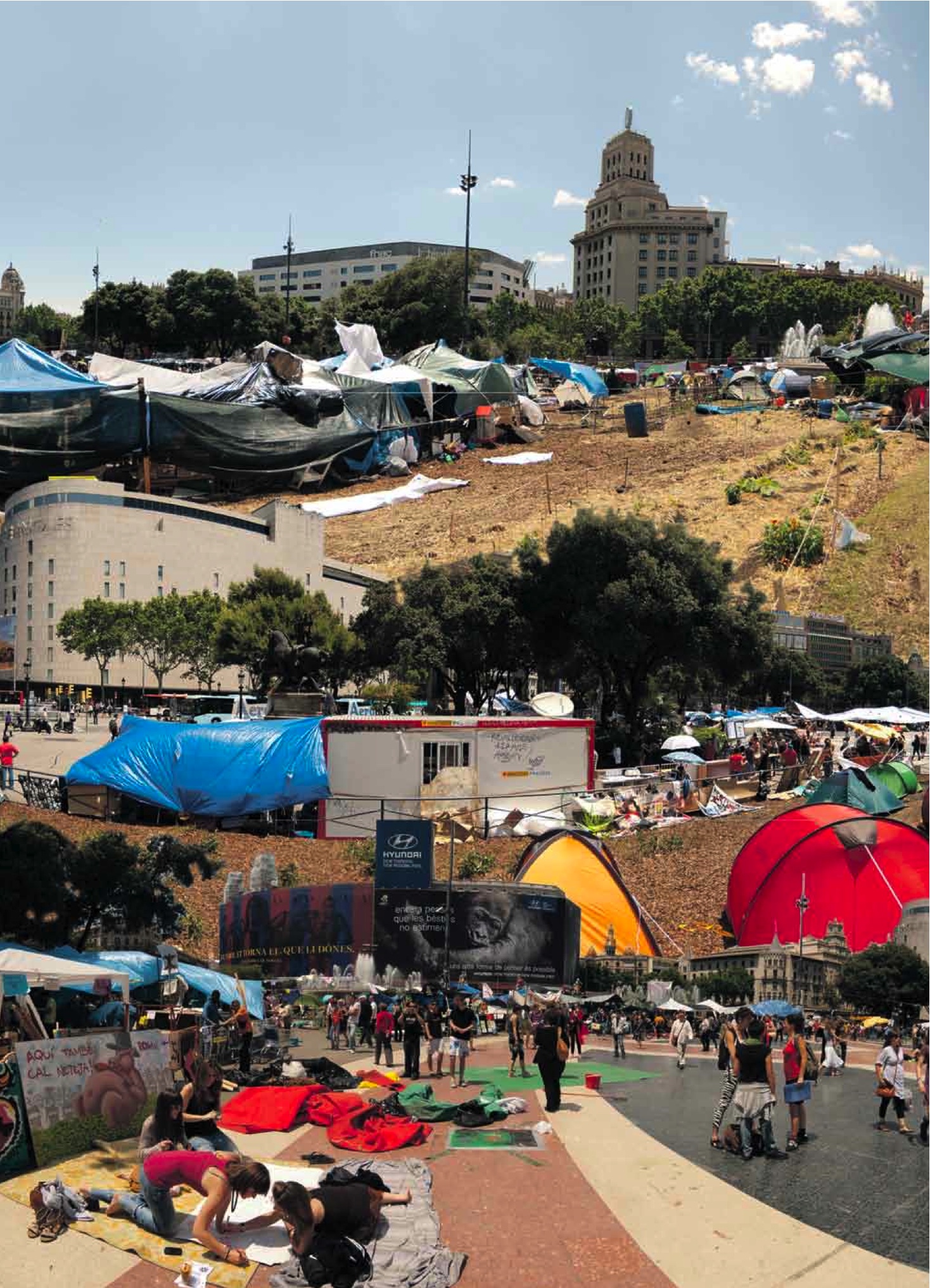 I swing wildly between months where it seems the world and everything in it is falling apart, and months like May 2011 where it seems that things are strangely coming together. No, I’m not talking about Argentinian ball control, a multi-million euro field game or even Shakira’s very very tight trousers. I’m talking about the mind-blowing minutes of my life I spent sitting on someone’s shoulders in a sea of pink disco lights and the wild waving arms of 40,000 Pulp fans. Jarvis had just dedicated “Common People” to the indignats in Plaça Catalunya, Gil Scott-Heron had just left us with his legacy “the revolution will not be televised” and right there it felt like it was all about to happen. But my over-excitement is rooted in a far more profound series of events: Starting on the 15th May, peaceful “yes we camp” protesters took over Plaça Catalunya. Their numbers swelled to the point of inspiring thousands to wake up to the idea that we live in a false democracy. Despite the fact that we all saw them being battered by the Mossos on Friday morning, it still feels like people are moving in the same direction; community action is the answer to many important political and environmental problems. And here are three more reasons to be optimistic:

1) The main message of the Plaça Catalunya acampada is “Democracy 2.0”. Manuel Castells described this in La Vanguardia on 28th May. Apart from the 21 concrete political objectives they have, such as controlling banks and fiscal fraud, it is the process by which protesters aim to achieve change that is most interesting. Under the headline “we’re going slowly because we’re going far”, a civil society that wants to be involved in the democratic process is emerging and building capacity for us to be in charge of our own environment.

2) Entirely distinctly from the #spanishrevolution I came across a brand new strategy document from Actionaid, a mainstream, international NGO that have been fighting poverty for 30 years and whose projects have reached 13 million people. Using feedback from 56 countries they have identified controlling your own local area – with regards to land access and food production – as number one in their list of five objectives.

3) Also, before any of these even came to light, I found an organisation in Barcelona that is already doing all the right things. They are the original and intended focus of this article and since I can’t predict the future of the acampada, and Actionaid is based all over the place, I’m going to stick to the inspiring, achievable and just plain beautiful vision of the future provided by Barcelona en Transició.

If you’re not sure where to start with environmental issues a good place is this: oil will run out one day. Depending on who you ask we are between 2 and 10 years from reaching peak oil production, which means from then on there will be less every year until it’s all gone, and when I say all gone that includes the last drops we can find by ripping out the Antarctic and all of Canada’s tar sands. That sounds a bit heavy and has been known to cause impotent, dizzy feelings of despair. Let me put it another way: would you like to grow and eat your own tomatoes?

Barcelona en Transició are a branch of the worldwide Transition Towns movement and work towards implementing practical solutions to convert to life without fossil fuels. Their mission is to connect communities, support them in activities such as creating gardens, and promote self-sufficiency, local currency/trading systems and ways of dealing with waste (Millor que nou– workshops where you can get free help to fix broken furniture and electrical appliances- is not run by Transition, but it is a great idea). They organise conferences and courses and share resources, such as the documentary Farm for the Future (UK, 2009) which points out the extent to which our entire planet’s food production system is unsustainable. After transport, food production is the world’s most oil-intensive industry and even “solutions” such as GM food are utterly dependent on fossil fuel for tractors, insecticide, fertilisers and heaters to dry the grain. The “gardening rather than farming” ideas provided in the documentary so impressed a friend that he spent three weeks hammering old pallets together to create an indoor vegetable patch which is now a jungle of green beans in his lounge. The vegetables have to grow inside his flat despite the fact that he lives just underneath a completely empty and unused 80 square meter terrace because el presidente won’t have anything growing on the communal roof top – not even one little bean. Oh, Barcelona!

Some of Transition’s projects have ambitions on a city-wide level and I met Duncan Crowley, architecture graduate/eco-researcher/Transition member to talk about them. I found him in Plaça Catalunya wearing a “Revolt Now” t-shirt in between a video conference with the protesters in Greece and his first proper night’s sleep in a week. His objectives within Barcelona’s Transition group are based on city planning for green space and he has a history of success with his proposition for an 18km ecological “green” route through Dublin. He brings with him acronyms (CPUL – Continuous Productive Urban Landscapes), logic, and the energy to make things happen as well as the occasional lapse into leprechaun moments with catchphrases like “gardens allow magic to grow”.

Through participative “open-space” Transition meetings a green corridor has been identified in Barcelona. Starting at the Arc de Triomf and finishing in Sant Martí you can follow a specific route and pass by vegetable gardens planted in disused plots of land (such as the Hort de Fort Pienc), the Parc de l’Estació del Nord, the Glòries roundabout (that needs some work..), the Parc del Clot, the Bac de Roda bridgeand other pedestrian walkways and parks.

The idea is that, starting with community action and guerrilla gardening, more and more food is planted at key spaces along the route – so-called connectors – and our city becomes greener, literally. The long-term plan is to integrate it into the council’s vision of these neighbourhoods, and in the end to create an entire circuit around the city which you can walk or cycle, surrounded by hedgerows, butterflies and plants. The council already knows that there is a serious lack of green space, particularly in the Eixample, and if the new treeless, concrete-filled, yellow tarmac-ed “park” in my block is anything to go by they don’t seem to be solving it by opening up the interior spaces in the style of Cerdà’s original plan.

Agenda 21 is the ayuntamiento action plan to promote sustainability. An education program has been implemented, but progress in other areas has been based on vague objectives and discussion rather than concrete successes. One clear statement it makes is to “protect biodiversity”- and if that has any real bureaucratic weight, Transition can use it as a tool to help different groups pull in the same direction. For now, if you want to help out, find the green corridor. Walk it, enjoy it, and see if you can’t plant a little something along the way.

As well as the Hort de Fort Pienc on the proposed greenway there are several other urban gardens in existence around the city. Groups of keen neighbours have made them happen and the norm is that contributors share out the produce between them, or eat it at a communal dinner. The Hort del Xino in the Raval is open on Sunday afternoons to anyone who wants to get involved.  Gràcia had its own community garden until last year, a squatted vacant lot with all of the concrete ripped out, but despite all the volunteers’ hard work the space was deemed illegal and forced to shut down.  To stop this from happening in the future Transition are working with government to legally allow all abandoned space to be converted into temporary gardens.

Many people work in the gardens purely for the love of it, but on a practical level these proposed local production zones could lead to local markets and, more importantly, a resilience to outside influences. My friend Claudia asks without fail at any public meeting she can get to: “Does Barcelona have a food sovereignty program? What would happen if a petrol crisis caused MercaBarna to shut down?” The answer is that supermarkets would run out of food in approximately three days.  But is that a strong enough argument to persuade the ayuntamiento to take these ideas seriously?

The big questions are: Can Transition inspire people to create a real and positive change? Can they force the government to take action on these city planning issues?  And could it be that democracia real ya gets communities together and succeeds in giving people a stronger voice on issues that are already affecting poorer countries and will one day affect us all? Participation at a local level is the key element and Barcelona can give themselves a gold star for this in May 2011. People are making real connections at meetings, which is much more effective than social networking websites, but will more people get and remain actively involved? In Transition’s case I’m going for yes, partly because of their infallible environmental argument, but mostly because gardening makes you happy.
…………………………………………………………………………………..